Introduction to Bravely Default for 3DS

In Bravely Default the player follows four heroes on their journey to save the world along the way of which they attempt to free the world of corruption and injustice.

Bravely Default is what many people consider a spiritual successor to the classic Final Fantasy games, because of its turn-based combat battle system and random enemy encounters. Its battle system offers greater strategic depth through the “brave” and “default” battle actions, which differentiates it from classic JRPGs and from which the game received its name.

The world in Bravely Default is drawn in a beautiful artsy style, reminiscent of picture books or paintings rather than a 3D game world. As a result, the art style of the game works well with the “chibi” or cutesy character art. 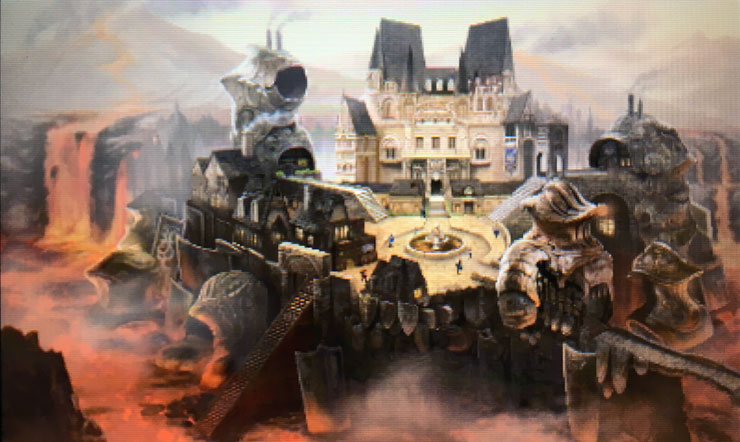 One of the many cities the player visits.

The heroes of this adventure are designed in a chibi-style with big heads and disproportionate bodies, which is meant to make them look cute, young and childish. Other characters follow a more mature and natural art style, making them feel more serious. Despite their serious looks, their dialogues are just as silly as those of the heroes. 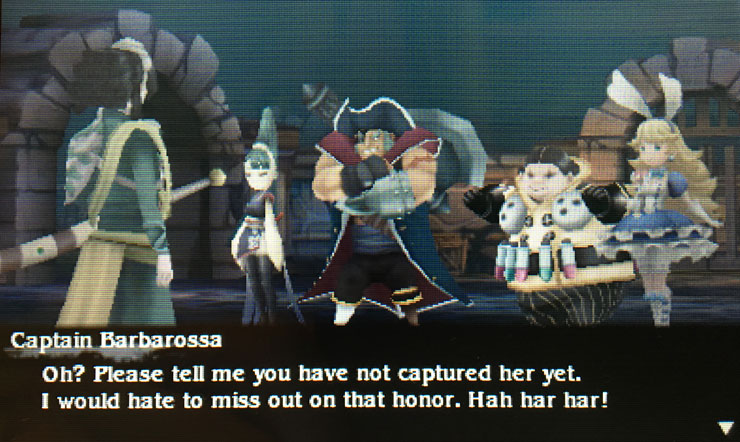 The art-style of bad guys in-game.

Good pacing at the start, yet the story seems a little dull from time to time. The characters can be very naïve in their decisions, yet this doesn’t take away from the games innocent feel. The story feels as though it is designed for children and adults alike, which makes for a pleasant overall experience.

Bravely Default features a mostly-open world, in that throughout the story players can move to wherever they wish, as long as they have previously unlocked the area. If the player attempts to enter a dungeon which has not been unlocked, the player is alerted that they cannot continue through this path. 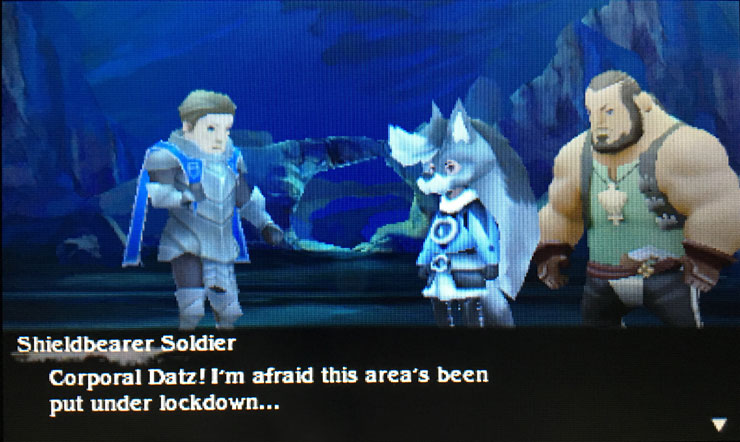 The story tells you to progress from one place to another in a quite linear fashion. You can, however, explore the world around you without any penalties. Side-quests are all related to the main-story, giving you more information about what is happening in each of the places you are visiting. The dungeons include small puzzles and sometimes hidden chests with loot (equipment or items). The dungeons are divided into floors (moving up or down) or in sections (moving to the edges of the screen to progress). Puzzles include switches which open or close a doors, switches which open and close a set of doors at the same time, or maze-like dead ends when crossing a section. 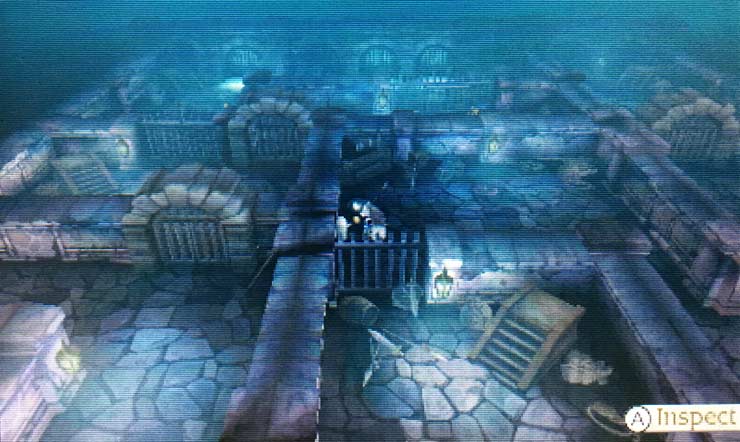 While roaming the world, monsters randomly appear and initiate the combat mode, similar to old Final Fantasy games or Pokemon games when walking through tall grass.

Bravely Default has a turn-based combat system, which allows for players to either attack directly using the weapons equipped or use magic, which includes support/healing magic, as well as damage-dealing magic (fun fact: weapons can be switched out in battle!). 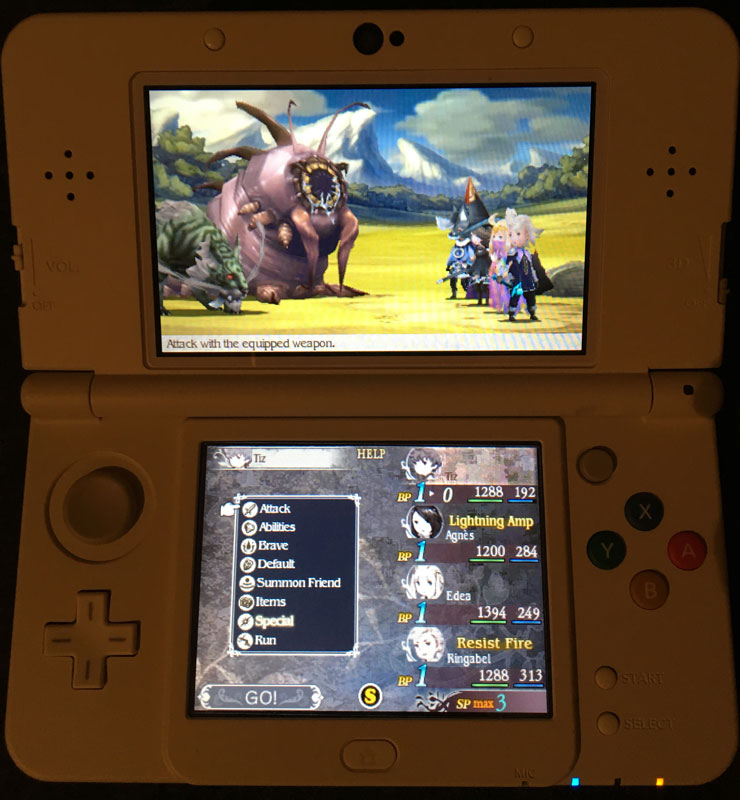 The player can decide not to attack and therefore save and stack that attack turn for the next round of attacks. This is called “default” and functions as a block at the same time, reducing damage received. Furthermore the player can “brave”. This links the turns stacked through default or future turns into a single-turn attack-chain. A character can therefore attack up to four times as soon as the battle commences. If you use future turns, your character will have no turns until the future turns have been recovered, leaving them without any blocking ability. Using future turns is useful when battling monsters through dungeons. 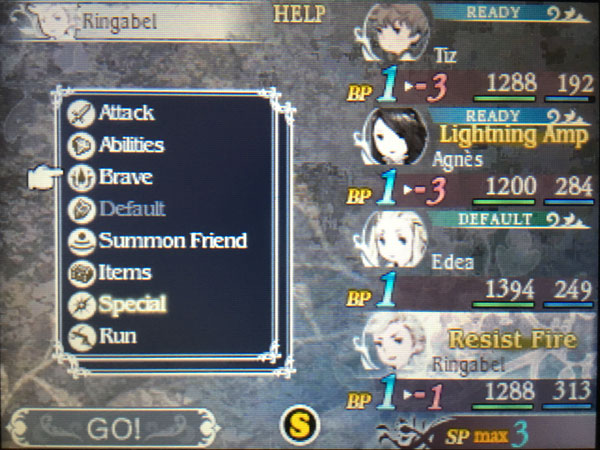 Brave and default stacked actions in a single round of attacks

The use of items is also permitted, which also includes support/healing items as well as single use damage-dealing items.

Finally, players can also choose to run from a battle, yet running is not always successful.

After a successful battle, the player is rewarded with pg (in-game currency), experience and job points. 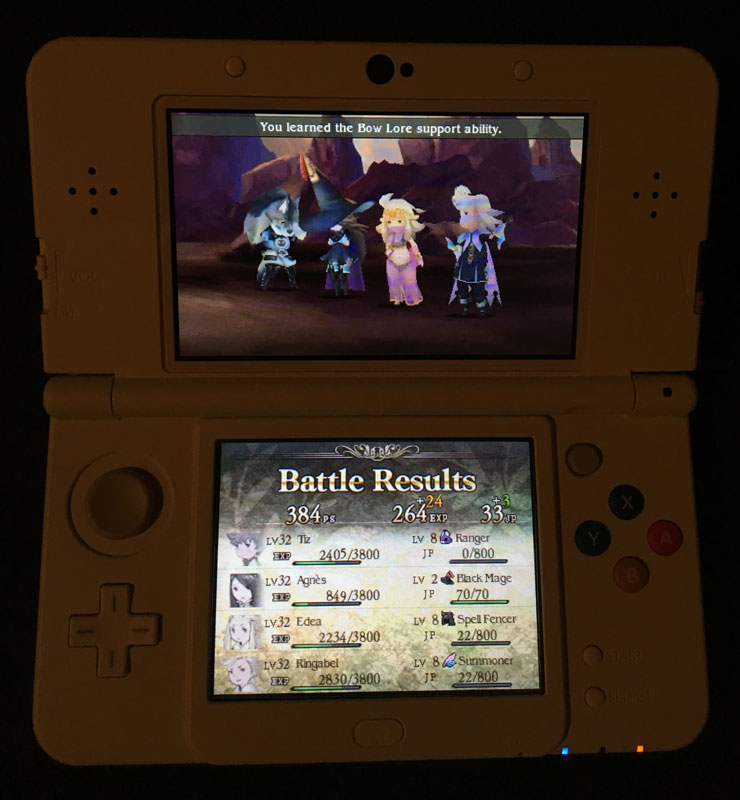 Finally, monsters in Bravely Default also have all the abilities outlined above, adding a level of great complexity to the fighting mechanics. The type of monster will also dictate damage buffs or damage susceptibility for both physical and magic attacks, as well as elemental damage.

A player can assign a primary and secondary job to each character, from which active and passive skills are selected. The job points earned from battle only level the primary skill. A character with the default magic job level of 1 will be able to cast level 1 active magic (e.g. heal) and use level 1 passive magic (e.g. increase mp by 10% as long as job is equipped). As the player progresses, more scrolls can be obtained to learn higher level of active magic. For example, a character could be primarily assigned the knight job and secondly the white mage job. As the character levels up, the knight job would continue to level unlocking more active and passive skills, while the white mage job does not. The game encourages shifting jobs to ensure secondary active skills grow along with the primary skills.

The usefulness of equipment depends on the aptitude as selected by the job. This is only influenced by the primary job, however different primary/secondary jobs, passive skills and equipment combinations can make a powerful fighter. For example, infusing elemental powers into weapons to add elemental damage to physical attacks, while using passive skills to increase weapons aptitude. There are countless combinations.

Finally, some equipment comes with stat boosts, such as amplification of certain elements or immunity towards status ailments.

Another key aspect to the game is levelling one’s hometown, which is a mini-game within the main game. Players assign their 3DS friends list or internet friends (the latter of which can be collected once a day) to different building or development projects in the mini-game, which they then work on independently. Multiple friends can be added to one area to decrease the time to complete the project. After completion, the user unlocks equipment and is periodically given bonus items. Any unlocked equipment can be purchased from the wanderer NPC in-game, who also doubles as a save-station. 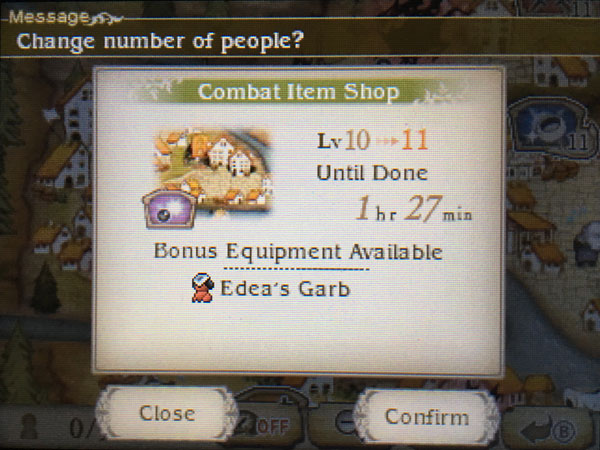 If 49 people are assigned to the job, it takes only 1:27 hours. If only 1 is assigned, it will take much longer.

Furthermore, players can encounter monsters transferred by other players and challenge these, to gain experience or acquire further items. The player can view the levels of the different buildings and also fight monsters transferred by players.

Bravely Default is a fun and very good looking JRPG for the 3DS, yet it is not revolutionary. The developers took the classic JRPG formula and put their own spin on it by adding deeper fighting mechanics. You’ll find yourself having to grind every now and then to beat the next boss or be able to enter a new area, which can make the depth of the battle system feel tedious. Thankfully the developers included functionality to fully avoid enemy encounters, to fast forward combat animations, to switch difficulties anytime and an automatic combat mode, which mitigate these issues. While the game is not flawless, it offers a fun 60-hour or longer adventure with a simple and innocent story. JRPG fans may find it fun and even slightly nostalgic, however people who dislike JRPGs or play for short 20 minute bursts may find it difficult to get into.